When it comes to Vodka, not everyone can set the standards, Russian Standard can. The No. 1 premium vodka in Russia, recognized for its superbly smooth spirit and pure taste, a result of the 1894 formula that Dmitri Mendeleev created for the Czars of the Russian Empire.

Today, the product range of Russian Standard is produced using only the finest ingredients and state of the art technologies, in one of the most modern distilleries of its kind in the world and has become the quintessence of vodka in its own motherland.

Its recipe is based on the combination of traditional wheat, coming from the Russian Black Steppes` fertile soil, and the remarkable clarity of the pure, soft, glacial water from Lake Ladoga οf the frozen north of Russia, one of the largest lakes in Europe and one of the biggest reservoirs of sweet water on Earth. This unique combination leads to an exceptionally smooth vodka that preserves unaltered its authentic Russian origin.

The unrivalled quality of Russian Standard Original is safeguarded inside an impressive bottle, inspired by the steeple of Saint Paul`s church in the heart of Moscow. Its design brings to life the remembrance of the Russian Empire, while highlighting the important role of vodka in Russian tradition. 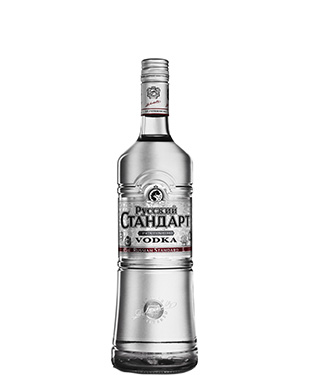