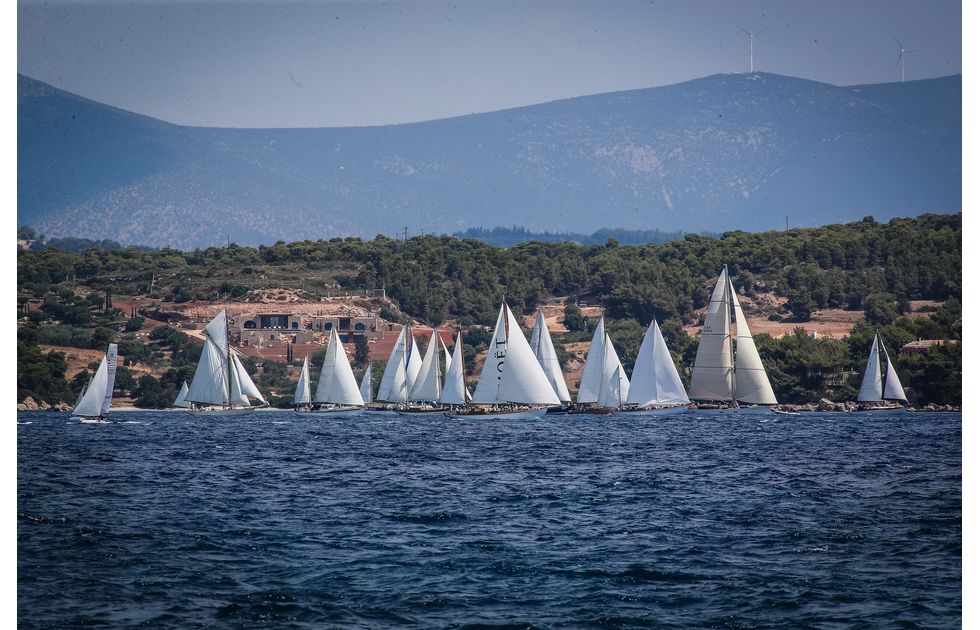 In a span of four days, the most handsome and historic yachts of the Greek seas swarmed to the waters off the coast of Spetses for the International Classic and Traditional Boat Race known to all as the Spetses Classic Yacht Regatta 2019 (SCYR), making for an absolutely photographable setting and offering intense maritime moments, during a race that has managed to become an institution in the Mediterranean. 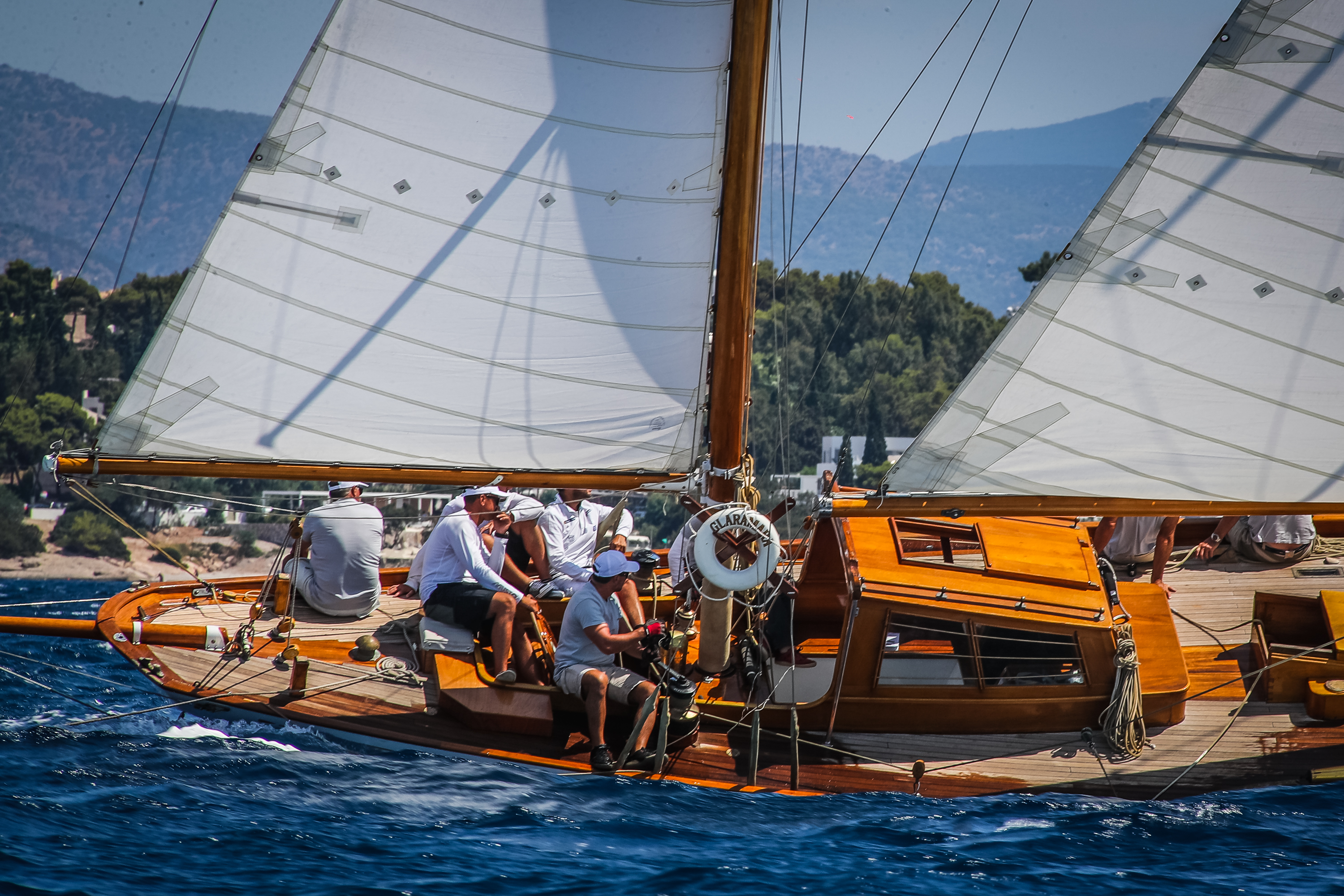 Another highlight for the guests was the chance to go aboard the Nacra 17 sailed by Olympic champion Sofia Bekatorou and Michalis Pateniotis, and experience first-hand the thrill of sailing in such a boat.
Apart from Sofia Bekatorou, other Olympic champions and world-class athletes graced the Classic Yacht Regatta with their presence, including bronze medalists Panagiotis Mantis and Pavlos Kagialis (Rio 2016), as well as bronze medalist Virginia Kravarioti (Beijing 2008). Worthy of a special mention is Giannis Mitakis, the Yacht Club of Greece skipper who has already qualified to compete at the Tokyo Olympics in 2020.

Along with the great skippers, Spetses also saw the arrival of exceptional boats from abroad, with the Organizing Committee winning yet another bet – that of international participation. For the very first time, the Spetses Classic Yacht Regatta was honoured by such vessels as the Helena, the Sultana, the enchanting Puritan and the quite unique Glaramara, all of which have sailed in numerous races.
Like every year, many sea scouts from all over Greece attended the event, showcasing their skills and proving beyond any doubt the continuity of the strong Greek maritime tradition.

Throughout the Regatta, Gold Sponsors Moët & Chandon and Grey Goose created interactive activations for skippers especially for the event. 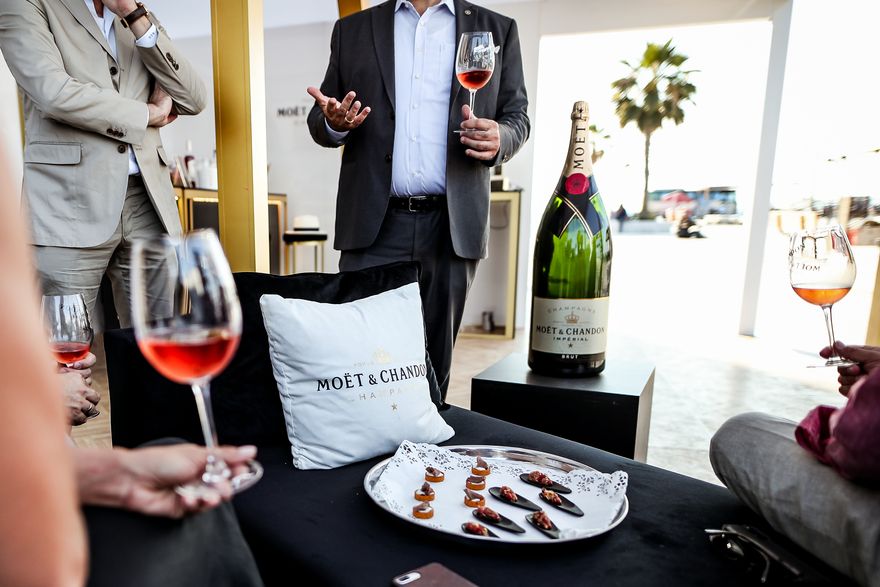 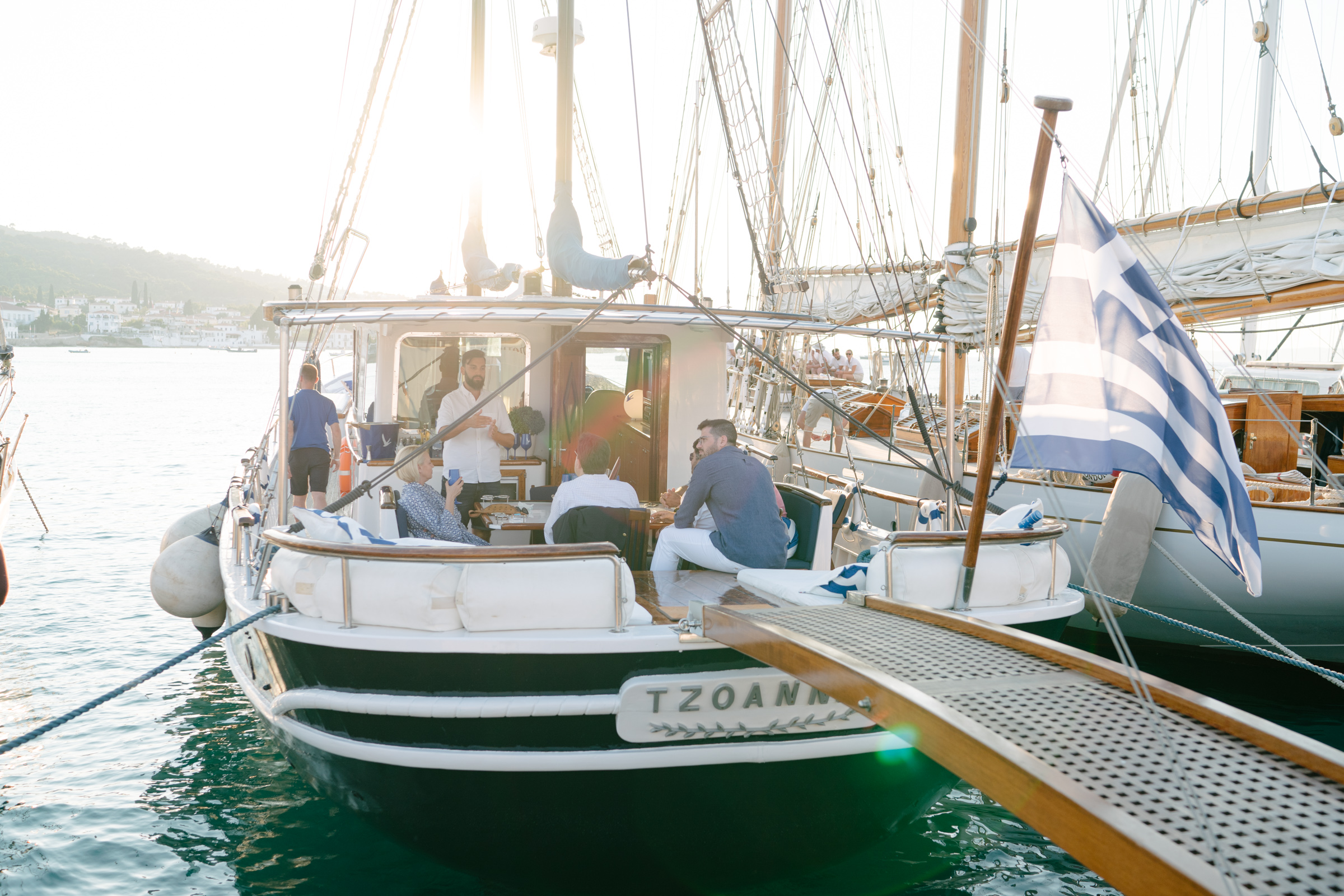 Always proud to be a Gold Sponsor, Moët & Chandon added more nautical miles to its long journey as a committed and passionate supporter of the wondrous world of sailing. From the opening night at the Poseidonion Hotel veranda and the Owners Cocktail at the pier to the very last award ceremony before sunset, and on every single racing day, the golden droplets of the world’s favourite champagne refreshed and rewarded crews and guests alike, contributing to the extraordinary atmosphere. For yet another year, Moët & Chandon set sail for a place on the podium with Olympic champions Pavlos Kagialis and Panagiotis Mantis in their exquisitely elegant Glaramara – a perfect way to celebrate the 150th anniversary of the house’s flagship product, the iconic Moët Impérial.

At the same time, Grey Goose welcomed its quests aboard an impressive traditional yacht for Grey Goose cocktails on board. While enjoying a great view of the race, patrons had the chance to attend masterclasses taught by the Brand Ambassador of the famously premium spirit. 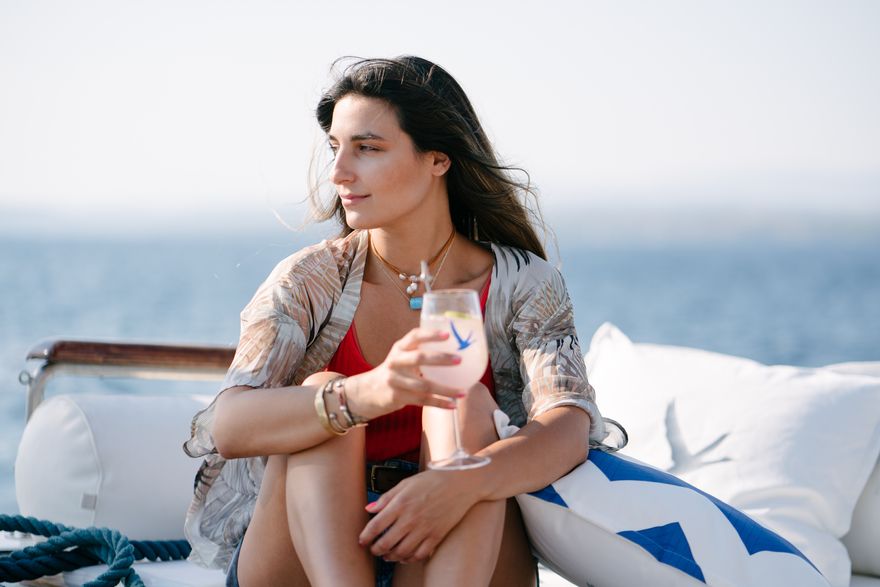 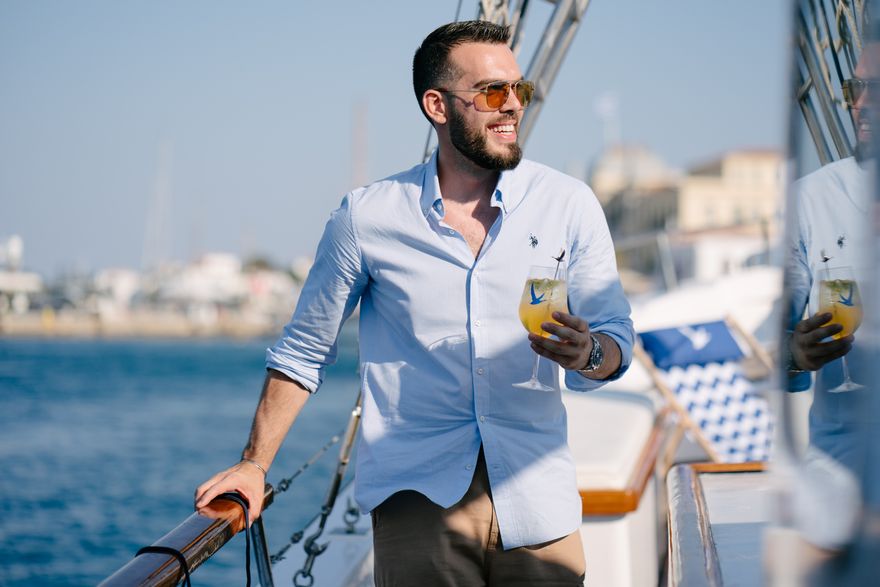 The four days of celebration kicked off on Thursday night with the opening of the 2nd Race Village at Poseidonio Square, followed by the stunning Welcome Cocktail Party held at the Poseidonion Grand Hotel, which also served as the racing headquarters.

The racing part of the event started on the 2nd day at 11:00, while audiences watched merely a few metres away from all the action. The day concluded with the winners receiving their prizes at Poseidonio Square.
On Saturday, another series of breath-taking races created new ripples of emotion among the athletes and the audience. In the evening, an award ceremony was held for the day’s winners, and the Concours d’ Elegance prize was also awarded to the best-preserved and most authentic-looking boats.
The celebrations for the day peaked soon after the ceremony, as historic car manufacturer Bentley also celebrated their 100th anniversary by presenting their brand-new Continental GT Convertible at the Bentley Athens pop-up stand at Poseidonio Square. A feat of incredible beauty and second-to-none engineering perfection, the classic automobile sure garnered a lot of attention among visitors. Bentley is a perfect match for the spirit of the event, as their cars incorporate a lot of hand-made elements, just like the traditional sailboats participating in the Spetses Classic Yacht Regatta.
Sunday was the day of the main award ceremony, which took place as soon as the races had finished and the general ranking for all categories had been established. 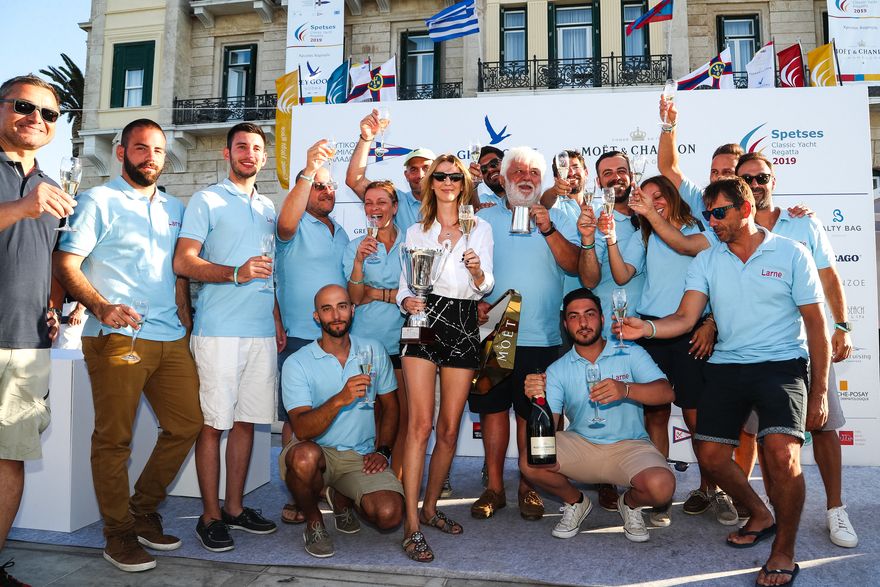 Another pioneering step for this year’s Spetses Classic Yacht Regatta was the partnership with Sailors for the Sea, the only international organization to accredit regattas as “clean”, i.e. sustainable, events. Specific actions were organized in this context; for instance, all skippers carried flasks they could fill with fresh water from stations set up especially for the event. Therefore, absolutely no plastic bottles or cups were used, while a sea cleanup operation also took place, and all the press material for the event was printed on eco-friendly paper.
As a result, the Regatta received a Gold accreditation from Sailors for the Sea, as a sustainable race that causes no harm to the environment. The Spetses Regatta is the only regatta in Greece to achieve such status, which created a commitment to take even more serious environmental action in next year’s 10th instalment.
ELIZA, the Society for the Prevention of Cruelty to Children, also participated in the Spetses Classic Yacht Regatta 2019. From their own stand at the Race Village, the Society raised their voice against the abuse of infants and young children. With their motto “Join us in stopping cruelty to children. Today. Not tomorrow!”, ELIZA welcomed visitors to their stand to provide information and raise awareness.
Alexandros Papadongonas, Commodore of the Yacht Club of Greece, said: “For yet another year, the Spetses Classic Yacht Regatta lived up to its reputation as the most extraordinary regatta in Greece, bringing together the most beautiful and historic sailboats of the Greek seas. It fills us with pride and joy that we have managed, through working with conviction and team spirit, to make this race on the island of Spetses one of the most important events of its kind in the Mediterranean.”

Another sponsor of the race was BWIN, which supported two lateen crews and created a unique setting at Poseidonio Square – complete with a colonnade and an impressive light show. BWIN is the world-leading brand in the gambling and betting industry.
This year, the National Bank supported the event as a Sponsor, continuing its long contribution to sports and maritime tradition in Greece.
The event also received the kind support of other businesses and brands. Amanzoe & Nikki Beach Resort & Spa took care of the accommodation of the Press; Sebago, a brand that promotes respect towards the craft of shoemaking, provided shoes for the Organizing Committee; last but not least, Salty Bag manufactured the skippers’ bags. La Roche Posay’s Anthelios line provided vital support to athletes and crews, protecting them as they spent hours under the sun for their favourite sport.
The volunteers from the Spetses Yacht Club provided valuable aid, as did the Bouboulina Museum.
For the 9th consecutive year, the Press Office and Sponsor Management were assigned to the Communication Lab and Dr Marina-Lyda Koutarelli.