It has the lightness of a young spirit and the depth of a well-aged one. It achieves a perfect balance between intensity and refinement. Inspired by the centuries-old Cuban rum-producing tradition, it was created by the famous Cesar Marti, the youngest Cuban Rum Master. Eminente is one of very few Cuban rums sold internationally, and holds the much sought-after ‘Denominación de Origen Protegida’ (Protected Designation of Origin) to ensure its authenticity as a Cuban rum.
Eminente Reserva is produced from distilled molasses and aged for seven years in white-oak barrels previously used to age whisky.
Taste Experience: Eminente Reserva has a rich, warmly aromatic character with notes of coffee, toasted almonds, cocoa and dulce de leche. It has a full-bodied and luscious mouthfeel that is perfectly balanced. Enjoy it neat, over ice or in an artfully mixed cocktail. Alcohol content: 41.3% ABV 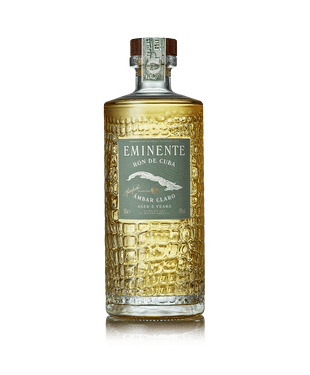